THE BROWNINGS. ONE GENIUS OF INVENTION AND FOUR GENERATIONS OF MASTER GUNSMITHS.

The greatest ever inventor of firearms was an American called John Moses Browning. However, he began his career far from the Connecticut Valley, known as the cradle of American arms manufacturing.

He was born in the still wild and mysterious far West, to which his parents had emigrated in the mid nineteenth century. His father, Jonathan Browning (1805-1879), was a Mormon patriarch who acquired three wives and fathered 22 children. He was also a gunmaker, setting up his business in Ogden, near Salt Lake City, in 1825. 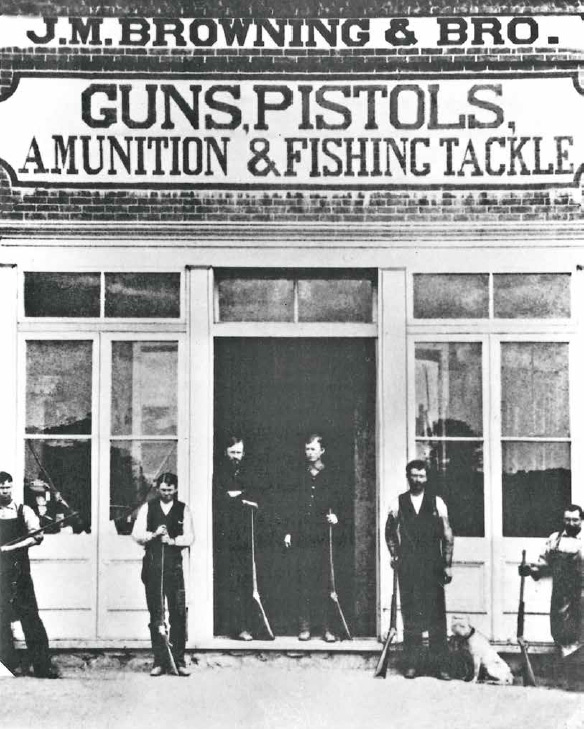 On 2 April 1897, the board of Fabrique Nationale (FN) sent its sales manager, Hart O. Berg, to the United States on a fact-finding mission into the advances that had been made in bicycle manufacturing.

In the course of his journey Berg met two American arms manufacturers, the brothers John Moses and Mathew Browning. John, whose ingenuity and creative spirit had earned him some celebrity in his native country, had just taken out a patent for a 7.65mm blowback-operated automatic pistol.

The manufacturing license was offered to FN and, championed by Berg, was presented to the board on 19th June of the same year. The contract was awarded on 17th July, signed by the company chairman, Baron del Marmol. 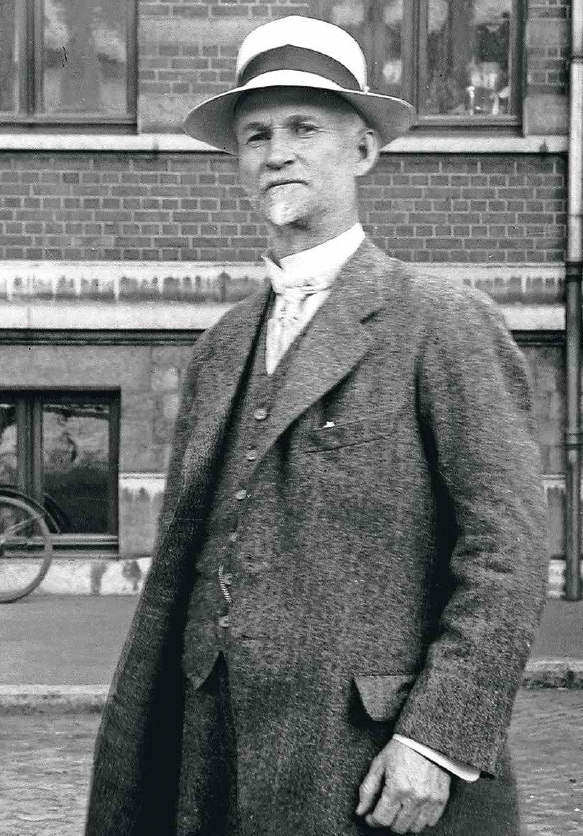 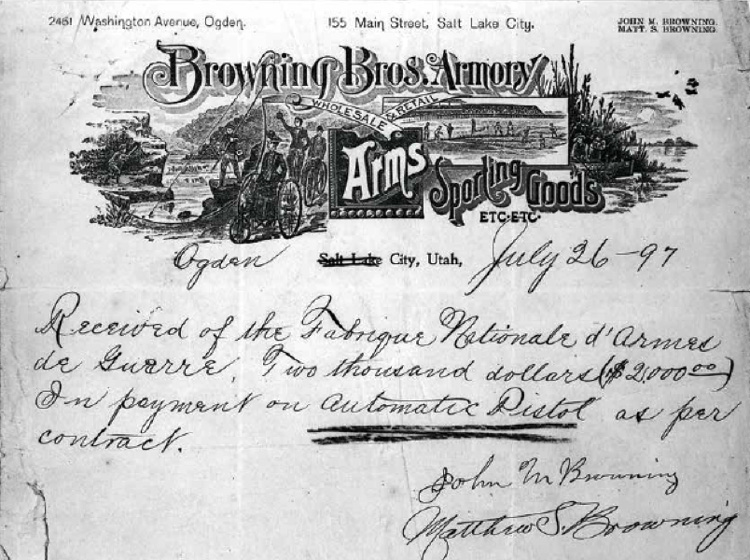 For historians of arms manufacturing, the inventions of John M Browning are characterised by their abundance and diversity.

These qualities, accompanied by a keen intuition for what clients desired, presented considerable advantages from a business perspective. The directors of FN wasted no time in obtaining the rights to manufacture most of Browningās new firearms as he invented them.

These included various models of pistols, one of which was a 9mm calibre bought in considerable quantities by the Swedish army in 1907. Another pistol, known as the 1910 model, could fire 7.65mm as well as 9mm cartridges when the barrel was changed.

1913 saw the introduction of an automatic .22 calibre rifle, with Browning ordering 50,000 units. In the same year he also invented a 20 gauge pump action shotgun, of which he bought 25,000 units. However, the advent of WW1 prevented its production.

Since 1907, and at FNās request, John M Browning had granted the right to use his surname as a trademark, thereby emphasising the common interests and goals that linked his family to the company. He never gave the same permission to any of the large American companies that had commercialised his first inventions, and the full significance of this decision would become apparent over the following decades.

The popularity of weapons developed by Browning and manufactured by FN would continue to increase, both in Europe and America. The sales figures provide convincing proof of this, especially with regard to pistols.

From 1899 to 1906, the number of pistols sold amounted to 250,000. In 1908 it reached 500,000 and in July 1912 the millionth pistol was assembled in Herstal. This event was celebrated on 31st January 1914 with a magnificent party, attended by 500 guests from the world of business and politics, including two ministers of state and the man of the hour himself, John M Browning.

After the end of the war, Browning came back to Herstal, where in collaboration with staff from FN, he resumed his research and inventions.

Among these were a .22 calibre ātromboneā rifle, a high-efficiency automatic pistol and a hunting shotgun with over-and-under barrels. The latter was in the prototype stage, having been designed three years earlier, but it was destined to become the world renowned B25.

Browning wanted both to improve its operation and to adapt it, as far as the techniques of the time would allow, to mechanical production at a competitive price. He was still perfecting it in 1926 when he died in his office at the company with which he had collaborated so fruitfully over the previous thirty years.

The completion of the B25 fell to his son, Val Allen Browning, whose eminent role both as an arms technician and a manager of the family business should not be underestimated. He had clearly inherited his fatherās genius.

Thanks to the combined efforts of father and son, as well as the technicians of Herstal, the Browning B25 over-and-under shotgun became a twentieth century world-class benchmark in the manufacturing of hunting and sports arms. Almost 400,000 were produced in Belgium over a 45 year period, 65% of which were destined for the North American market.

Frequently envied and sometimes imitated by competitors, the B25 has never been bettered. 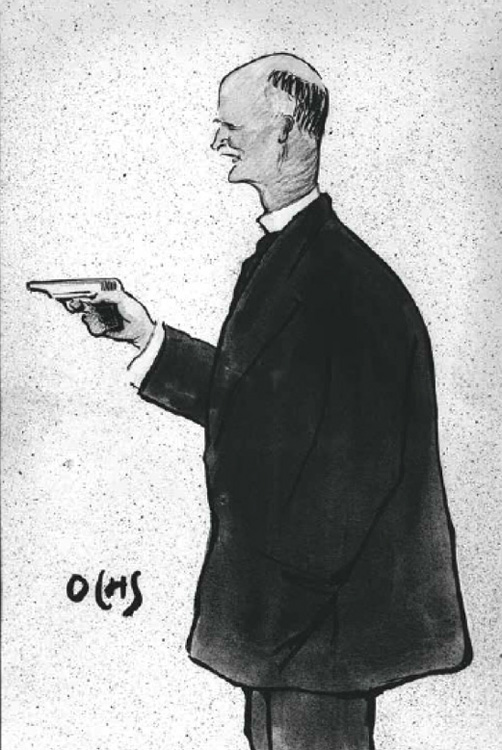 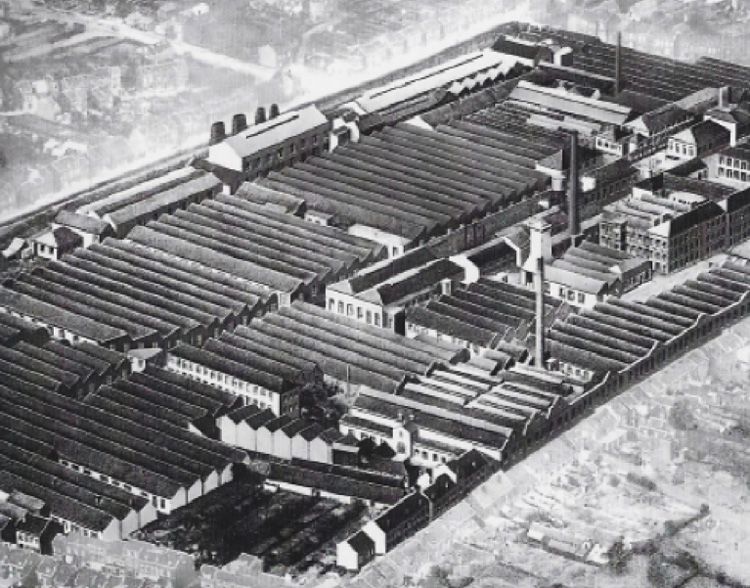 The B25 has been handmade entirely in Belgium since 1931 and is the flagship of The John M Browning Collection.

The gunsmiths of the National Fabrique at Herstal can carry out practically any customisation work our customers require. These firearms are entirely assembled, adjusted and engraved according to the specifications of our clients around the world.

THE BIRTH OF A TRUE MASTERPIECE


The feeling one experiences in owning a B25 is no different to that of posessing a piece of art by one of the great masters. The B25 is such a masterpiece, the design of which reflects John M Browningās knowledge of hunters. He knew they preferred a single sighting plane and a single selective trigger, and he fulfilled their desires with his unique ability to achieve perfect balance, economy of proportion and an aesthetically pleasing design.